Whilst 2019 is not over yet, it can, in a nutshell, do one.  It’s been a difficult year.  I haven’t been able to bake as often as I would have liked to, and I seem to have had more recipe failures this year too.  This happens, can’t always be perfect as I tell Tony!  But, rationalising it aside, it is wearing.

I wanted to bake this weekend, something easy, not too much effort.  I looked through cookie recipes, but nothing really screamed “bake me!!”.   When I am feeling like this, I revert to recipes I’ve tried and trusted.  But that is a habit I need to stop.  I had a packet of salted cashews in the house, why not put them in a cookie.  Why not indeed.  I adapted (tweaked, yes, I tweaked) a recipe from Good Housekeeping magazine for chocolate chip cookies. Mine were lumpy and mis-shapen – a lot like me – but hey, looks aren’t everything!

Using an electric whisk, beat together the butter, sugars, vanilla and golden syrup until light and fluffy.  Add the beaten eggs and beat the mixture together well.  Fold in the flour and bicarbonate of soda and then mix in the chocolate buttons and cashew nuts.

Spoon heaped teaspoonfuls of the batter on to the baking trays, spacing them well apart.

Bake for 10 minutes for a chewy cookie, or 12 minutes for a crisper cookie.  Remove from trays and cool on wire racks.  Leave to cool completely before eating, go on, I dare you!

Get yourselves a large mug of hot sweet tea, and an ice pack for your heads.  This was a traumatic journey.  Years ago, I saw a recipe for Pan de Muerto and really wanted to try it, the combination of orange and aniseed flavours sounded intriguing.  But at that stage I didn’t have much confidence with bread baking.  Roll on the years and I have baked focaccia, whole-meal bread rolls, seeded bread as well as sourdough loaves – and made my own starter for this too, I have also baked cinnamon buns – my first foray into enriched dough.  Now I was feeling a lot more confident, and so out came my recipe for this bread – completely co-incidentally on the 1st November, so it was timely too.  I would use the recipe from the book “Bread” by Eric Treuille & Ursula Ferrigno, a book I have baked from many times.

I read this recipe over and over again.  Yes, this I can do.  My first stumbling block however was ingredients.  I couldn’t find orange flower water, or anise seeds.  I Googled substitutes for both ingredients.  I could use star anise for the anise seeds, and I could use orange extract for the orange flower water but only a few drops as the extract is much stronger.  I’d have to wing this bit.  I wasn’t sure either how the strength of star anise versus anise seeds would compare.  I ground up three star anise, using the seed pods as well as the seeds.  I was feeling reasonably confident.

I mixed up all the ingredients for the dough and broke my trusty old faithful wooden spoon whilst trying to get the dough to come together.  Cue rising stress levels.  Then my dough was more like a cake batter than a bread dough, and as such it was it was impossible to knead.  Due to the lack of wooden spoon, my hands were now coated in the batter / dough mixture.  Panic was starting to set in.  I re-read the recipe, checked the ingredients.  I had done everything I should have.  In fact, there was marginally less liquid due to me using a few drops of orange extract instead of a tablespoon of orange flower water.  This was not making sense.  I had no option but to add more flour to get the mixture to the point where I could knead it.  I added flour, and more flour, and more…….until finally I turned it out of the bowl and started kneading.  Aaah…..kneading is so therapeutic, it is one of the many enjoyable parts of baking bread. I completed the kneading, put the dough away to rise and felt slightly more confident. Two hours later I went to check on the dough.  It had not risen.  Not one bit. Cue rising stress levels. 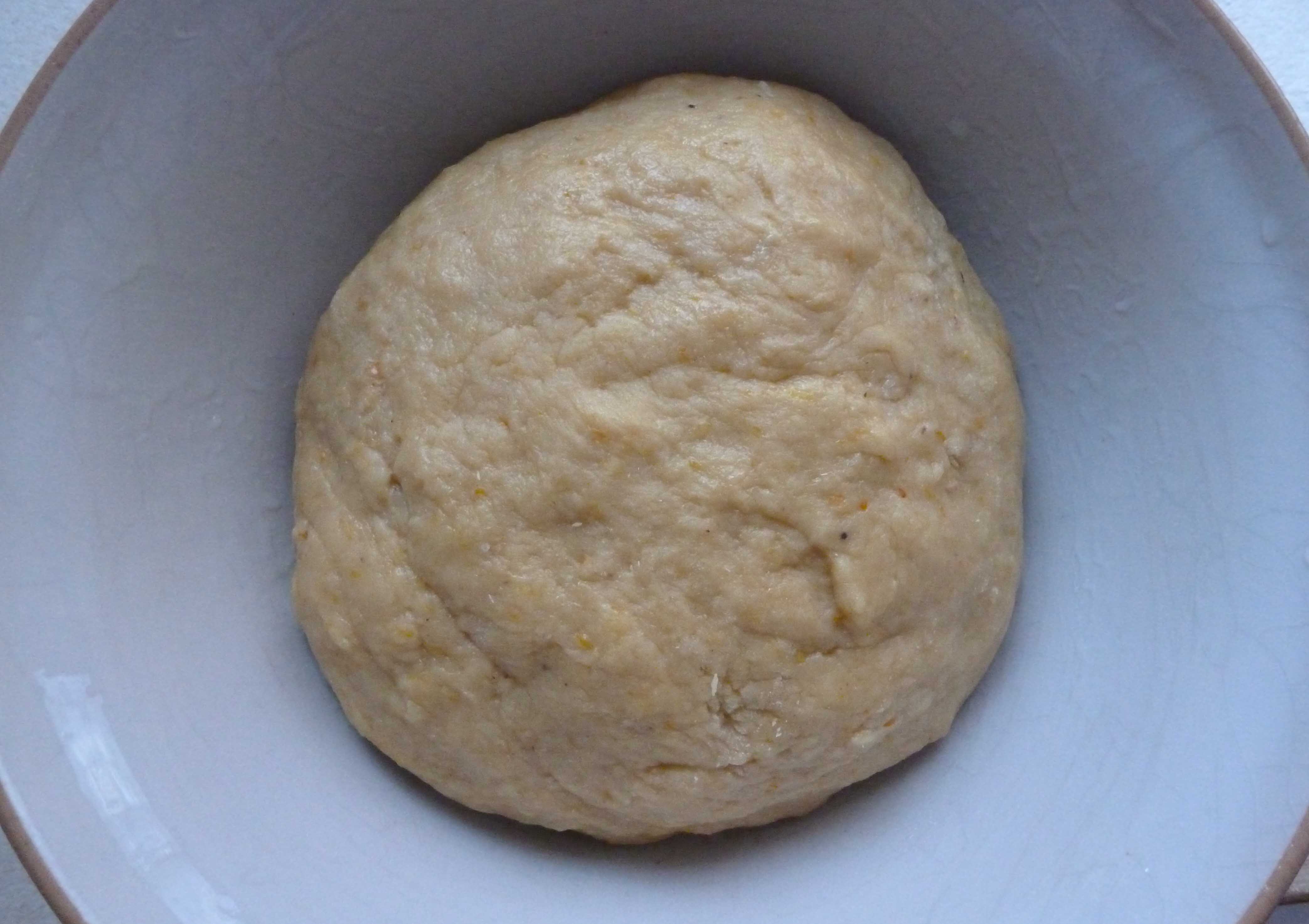 I decided to give it another hour.  But, still no rise.  I took it out of the bowl and slapped it around for a while.  What to do?  I felt resentful at the thought of throwing it all away.  What a waste.  Also, being one of those irritating people who can’t give up, I was determined not to let this failure stand in my way.  I would persevere, I would make this work………I hoped!  I warmed the bowl and put the dough back in the hope that it might rise.  I also mixed up a little extra yeast with lukewarm water and flour and left it to settle. Half an hour later I hauled the disobedient dough out of the bowl and mixed in the additional yeasted mixture.  I put this aside for another half hour to rise.  Reader, would you be surprised to know, it didn’t make a difference?  Sod it, I thought, I’m going to bake it anyway.  But I didn’t want to waste my time shaping and decorating the loaves (the recipe makes 2 loaves) if it might not even be edible at the end.  I shaped it into one oblong loaf and left it for a further half hour, and then, death or glory, I put it in the oven to bake.

Do you know what that sodding loaf did? It rose three times its size in the oven.   There was a chance it would be edible!  The scent of orange and star anise whilst it was baking was wonderful.  If nothing else, there was that good thing! 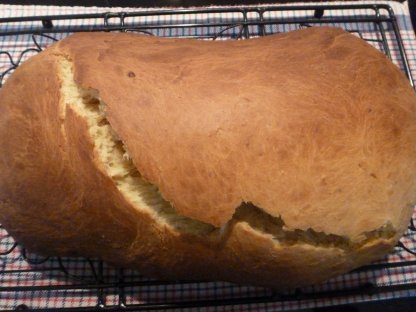 It cracked along the top of the loaf during baking.  I was past caring.  I knew now, that however delicious – or not – the loaf might be, I would never bake this bread again.  Never.

And the taste? It was good, it was very edible (pheeew!).  But the effort, the stress……and I just don’t know where I went wrong, that’s what bugs me.  For what it is worth, here is the recipe, I have omitted the part about shaping the smaller bits of dough for the decoration, because, life is too short, but there are many recipes on the internet where you can see those.

Zest of one orange, finely grated

In a large bowl mix the flour, yeast and salt.  Mix together the beaten eggs, melted butter, orange zest, water, sugar, orange flower water and anise seeds. Mix into the dry ingredients to form a soft, sticky dough.  Turn out onto a lightly floured work surface and knead until smooth and elastic – about 10 minutes. Put the dough into a clean, buttered bowl and leave to rise until doubled in size – about 2 hours.

Divide the dough into two equal pieces, to make two loaves.  This is the point where you might want to do the decorative part (or not!). Place the loaves on a buttered baking sheet, cover with a towel and leave to prove until risen, about 30 minutes. Preheat the oven to 180°C (160°C fan).

Brush the loaves with an egg glaze and sprinkle with sugar.  Bake for around 35 minutes until golden and hollow sounding when tapped underneath.  Leave to cool on a wire rack.

I wish you better success than I had with this.  I am glad that I made this, and glad that I didn’t give up and bin the dough.  I suspect the fault very much lay with me rather than the recipe, as it is from a book I have used time and again, with success. 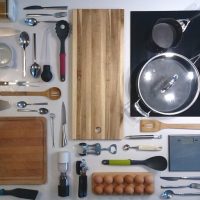 , easy, tasty and surprising recipes for everyone

The best longform stories on the web

Coffee with the Queen
My Wordpress
Bitches That Bake

Where me and my husband share our love for cooking & baking & our adventures here in New Zealand.